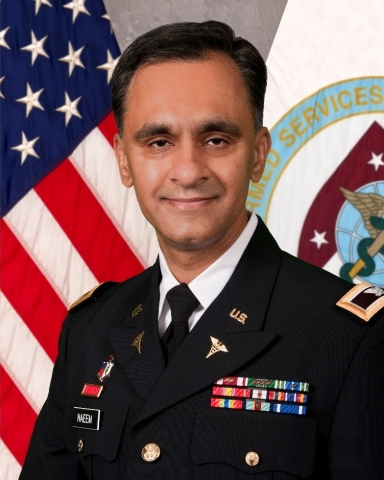 Army Colonel (Dr.) Mohammad Naeem is the 20th Director of the Armed Forces Radiobiology Research Institute (AFRRI.) As such, he is responsible for preserving and protecting the health and performance of U.S. military personnel operating in potential radiological and nuclear contaminated multi-domain battle spaces or urban environments; through research, education, and operational training that advance understanding of the effects of ionizing radiation and development of medical countermeasures in line with the 21st century national security threats posed by non-state actors and near-peer adversaries, as well as providing rapidly deployable radiation medicine expertise in response to a radiological or nuclear event domestically or abroad.

An American of Pakistani heritage, COL Naeem received his medical training at King Edward Medical College in Pakistan, after which he returned to the U.S. to pursue a medical internship at Mount Sinai-Elmhurst Hospital Center in Queens, New York. He completed a Diagnostic Radiology residency at Penn State Milton S. Hershey Medical Center in Pennsylvania and received his commission through the Army Reserve during his residency training.

COL Naeem has held a number of challenging leadership assignments, including chief of Chest Radiology and Radiology residency program director at Madigan Army Medical Center in Tacoma, Washington; officer-in-charge of Radiology Education, chief of Nuclear Medicine, and chief of Radiology at Landstuhl Regional Medical Center Germany, and Europe Regional Radiology consultant. He also served as chief of Radiology at a NATO-ROLE 2E Spanish Air Force hospital in Afghanistan as part of the 10th Combat Support Hospital unit embedded with European Forward Surgical Teams in a multinational environment, physician-member of the Europe Regional and continental U.S. rapid response Radiological Advisory and Medical Teams, chief of Chest and Body Imaging, and officer-in-charge of Strategic Radiology Operations at the Fort Belvoir Community Hospital as well as the officer-in-charge of the FBCH Emergency Response Team, among other assignments.

COL Naeem is a Diplomate of American Board of Radiology, clinically practicing at FBCH, and is a Fellow of the American College of Radiology as well as American College of Chest Physicians. He is a trilingual military officer and a medical warfighter whose operational and academic interests lie in the medical aspects of asymmetric warfare, 21st century national security threats, combat radiology and battlefield imaging, nuclear enterprise and CBRNE disaster preparedness. He is also the co-chair of the military subcommittee of the American College of Radiology and has acted as the U.S. Army Councilor to the ACR protecting, representing and promoting Military Radiology’s interests and image at the national level.

COL Naeem holds The Army Surgeon General’s “A” Designator for clinical excellence, is a member of the Order of Military Medical Merit and was the recipient of The Army Surgeon General’s highest award for military medical excellence, the Major General Lewis Aspey Mologne award, in 2019. He has lectured at approximately 40 local, regional, national and international conferences during his career.